Distributed Proofreaders proudly brings to you Project Gutenberg’s 50,000th title, John Gutenberg, First Master Printer, His Acts, and most remarkable Discourses, and his Death, by Franz von Dingelstedt, translated from the German and published in 1860. 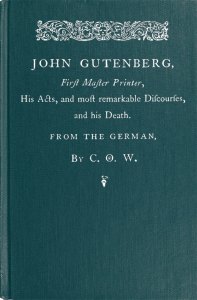 I couldn’t think of a more appropriate title to celebrate this milestone. Johannes Gutenberg is known as the inventor of the moveable-type printing press, which led to the mass production of printed books and subsequent growth of literacy, knowledge and learning.

With notification that PG was nearing its 50,000th book, the project manager suggested that if we hurried, perhaps we could finish it in time to be considered as a contender.

More than 30 volunteers joined in with no notice and made sure the pages were proofread and formatted to a standard of excellence, so that there was very little for the post-processor to have to do to assemble and check the pages for the final ebook. A draft was made available, and in next to no time smooth readers had read the book and reported their findings to ensure the ebook represented the original.

The book is a biography of the man, born Johann Gensfleisch, who preferred to be known as Johann Gutenberg (John Gutenberg in the translation). His inventions led to the printing of the first book published using moveable type, the Bible in Latin. He had little money and was unable to continue his experiments without financial backing. He met John Fust, who bankrolled Gutenberg’s venture, and the Bible was completed in time for the wedding of Fust’s daughter:

The Bible, on its part, had its silver clasps well rubbed and polished, and, being placed on a table, it shone, to the edification and admiration of all beholders.

The book quotes Gutenberg as saying:

My art belongs to me as much as to the rest of the world; let it remain the property of intelligence, and only be practised by those who have been initiated in it.

Yet he felt that his:

… art is not like any other art; a painter sketches his figures on the canvas, and he perfects the creation of his thought; the same with the poet, the engraver, the architect, and the musician; we, on the contrary, with our presses, are only the servants of others; printing is only an instrument for thinkers. Of what importance are the fingers which regulate the letters in a book? Of what importance is the hand which works the press, which arranges the pages and the leaves, which gives a visible form to the action of the mind?

Gutenberg toiled long and hard, working in dark, oppressive and humble conditions, but eventually he lost his business to Fust and died “neglected and in destitution.” His legacy, however, lives on, and his namesake, Project Gutenberg, continues the philosophy of sharing the printed word with the world.