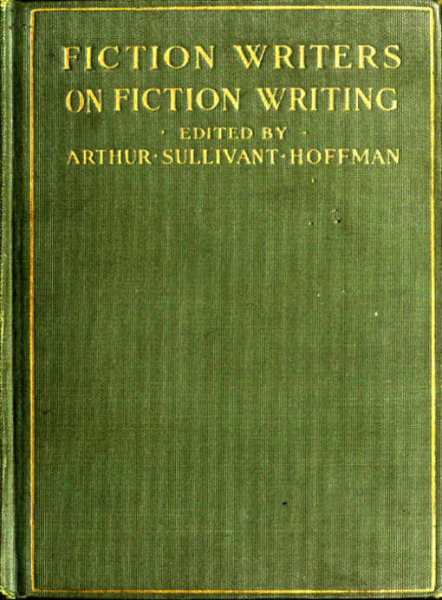 A big benefit of post-processing books for Distributed Proofreaders is discovering bewitching books that I probably won’t have seen otherwise. Such books include a biography of the writer Lafcadio Hearn, The Journal of the Debates in the Convention which Framed the Constitution, and Breaking into the Movies, a 1921 guide to breaking into silent movies.

My latest find is Fiction Writers on Fiction Writing, printed in 1923, in which the editor, Arthur Sullivant Hoffmann, asked 116 authors a set of questions about fiction writing. The authors included Sinclair Lewis and Booth Tarkington.

The book includes some very interesting answers. For instance, in answer to the question:

“What is the genesis of a story with you–does it grow from an incident, a character, a trait of character, a situation, setting, a title, or what?“

“usually from an incident, sometimes from a single phrase which illuminates a character; never from a title.”

“No definite principle can be laid down as to the inspiration of a story. It may be based on an actual occurrence; a striking tradition; a strange custom. Or an argument may suggest a point to be proved by a story. An extraordinary character, an unusual scene, an atmosphere even (fog, storm, scorching heat). I think one of the basic principles is the desire to tell something unusual about things that are commonplace, or to tell something commonplace about things that are extraordinary.”

I will be posting questions and partial answers from the book to Twitter about once a week, with the hash #FWFW. The longer answers will be in the comments below.

This post was contributed by Ernest Schaal, a Distributed Proofreaders volunteer.