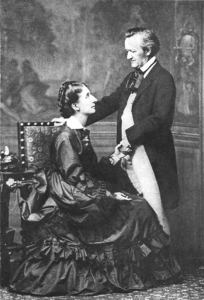 I volunteer on the Distributed Proofreaders Music Team, which helps transcribe music in the books we work on for Project Gutenberg into audio for readers to listen to and enjoy. All kinds of books — not just books about music — can contain music: hymnbooks, children’s books, history books, biography books. All kinds of books contain music! These days, we are able to add sound files to what was once only a visual experience. What a wonderful technological advance!

The books we prepare for Project Gutenberg are in the public domain. Public domain means the music is old by today’s standards, and sometimes ancient by anyone’s standards. The internet in general, and YouTube specifically, offers an awesome amount of audio listening, even for musical relics! I’m always amazed when I go hunting for a specific tune and find it already online, sometimes in several versions. What a wonderful achievement! I no longer have just black noteheads on stave lines. Someone else has already thought this through and provided indications for tempo, dynamics, articulation, and instruments, things not always specified in the original score. Marvelous!

On the other hand, there are pieces that simply don’t have any guidance other than what’s provided in the book itself. Sometimes I just have to listen to lots of medieval music, or lots of African chants, or lots of Chinese opera to get a sense of the general direction, and then make my best guess.

Happily, Richard Wagner falls into the first category. Lots and lots of Wagner to listen to! Yet, when a book contains just snippets of his music, I have to find a handful of bars in any one of Wagner’s musical tomes to figure out how they should sound. His compositions not only go on for hours — sometimes they go on for days! Der Ring des Nibelungen comes to mind — four German-language epic music dramas spread over four consecutive evenings. The only solution for transcribing Wagner’s music is to take whatever hints I can find in the text, then start listening and researching full scores for all the information needed to recreate his glorious sounds. Armed with this knowledge, I then use music notation software and other tools to create the audio files.

I won’t bore you with all the details of getting from here to there. I will only say it was a committed effort of many, many hours over many weeks to pull this together. We’re volunteers, and as much as we love what we do, Real Life also has its demands.

Following are five excerpts from Wagner as Man and Artist by the eminent English musicologist Ernest Newman. Each excerpt contains Newman’s description of the music, an image of the music snippet, and an audio file (MP3) so you can hear it. To see and hear more, go to the HTML version of the e-book at Project Gutenberg, where you can also download PDF images of the music notation and MusicXML files that can be opened in just about any music notation program, as well as MP3 files. Enjoy!

Shakespeare’s magic is in the phrasing,—not, be it remembered, a merely extraneous, artificial grace added to the idea, a mere clothing that can be put on or off it at will, but a subtle interaction and mutual enkindlement of idea and expression. For the musician that enkindlement comes from the adding of music to the words: the music does for the idea what the style does for it in the case of the poet,—raises it to a higher emotional power, gives it colour, odour, incandescence, wings. Brynhilde comes to tell Siegfried that he must die. The mere announcement of the fact is next to nothing; the infinities and the solemn silences only gather about it when the orchestra gives out the wonderful theme.

In the third scene appears a theme that was afterwards expanded and put to splendid use in Tannhäuser. Here the nuns sing it behind the scenes to the words “Salve regina cœli.”

In the opening scene of the second Act,—the garden of the prison in which Claudio is awaiting death—we have another employment of the leit-motive, the oboe giving out softly the theme to which Claudio had previously urged Luzio to implore the help of Isabella, but now with appropriately altered harmonies—

The later Wagnerian method of accumulating excitement, which we have seen anticipated in Die Feen, is employed also in Das Liebesverbot, as in the following passage, which, like the one previously quoted, gives us a decided foretaste of the meeting of Tristan and Isolde—

This post was contributed by Jude Eylander, a Distributed Proofreaders volunteer.