The April Baby’s Book of Tunes

This post is published in celebration of the 100th anniversary of Children’s Book Week, April 29 to May 5, 2019. 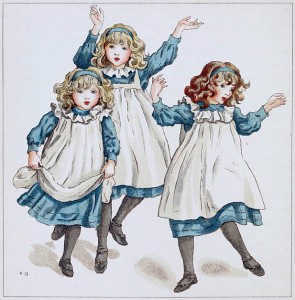 Distributed Proofreaders volunteers have always loved preserving children’s books, from the famous to the obscure. Hot off the Press has highlighted quite a few of our outstanding e-book versions of works for young people, such as L. Frank Baum’s Oz books, popular juvenile series starring the likes of Nancy Drew and the Hardy Boys, dime-novel series like Motor Matt, and books illustrated by beloved artists like Walter Crane. But these are just a tiny fraction of the total: Distributed Proofreaders has contributed over 3,700 children’s books to Project Gutenberg.

One very recent example is The April Baby’s Book of Tunes, published in 1900. It tells the story of three little girls in Germany who are stuck indoors during an unexpected April snowstorm just before Easter. Their mother entertains them by setting a variety of well-known English nursery rhymes to music.

Though credited only as “the author of Elizabeth and her German Garden,” the author was Elizabeth von Arnim, then known as the Countess von Arnim-Schlagenthin. Born Mary Annette Beauchamp in Australia but raised in England, she married a Prussian count in 1891. They had five children (three of whom were the models for the little girls in The April Baby’s Book of Tunes), but the marriage was not a happy one. The count’s propensity for racking up debts eventually led to his being imprisoned for fraud. This in turn led to her writing her successful semi-autobiographical novel, Elizabeth and Her German Garden (1898), under the pseudonym “Elizabeth.” She wrote some 20 books, mainly novels; two of them, The Enchanted April (1922) and Mr. Skeffington (1940), were made into popular films. After the count’s death in 1910, a turbulent affair with H.G. Wells, and another unhappy marriage, this time to the 2nd Earl Russell (whom she satirized in her 1921 novel Vera), she led a peripatetic life that took her all over Europe and the United States. She died in Charleston, South Carolina, in 1941.

Perhaps the most delightful part of The April Baby’s Book of Tunes are its 16 charming color illustrations by the great children’s book artist Kate Greenaway. It was one of Greenaway’s last published works; she tragically died in 1901 of breast cancer at the age of 55. She was justly famous for her use of vibrant color in depicting beautiful children in beautiful surroundings, and The April Baby’s Book of Tunes is no exception.

As if that weren’t enough, the book features 10 little songs, prettily arranged for voice and piano (presumably by von Arnim herself; the composer is not credited). In the HTML version at Project Gutenberg, you can click on links to hear the music and download the notation if you wish.

The April Baby’s Book of Tunes is “Elizabeth’s” only children’s book, but it’s a lovely example of the genre. It could not fail to be, with Kate Greenaway’s entrancing illustrations.

This post was contributed by Linda Cantoni, a Distributed Proofreaders volunteer.