Christmas around the World

With this challenging year finally coming to a close, we definitely “need a little Christmas.” Distributed Proofreaders volunteers enjoy their Special Day projects, and Christmas projects are especially beloved. This blog has featured a number of them in the past (see the box below). Today we’ll take a look at the array of Christmas books with an international flavor that we’ve contributed to Project Gutenberg. 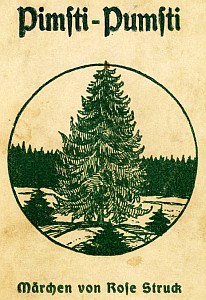 Earlier this year, we posted Pimsti-Pumsti, a collection of German fairy tales published in 1919. The original book was printed in Fraktur, an old German blackletter typeface, but our e-book version is in modern Roman typeface. The title story, “Pimsti-Pumsti oder Weihnachten im Walde” (“Pimsti-Pumsti, or Christmas in the Forest”), is about two little girls whose mother is lying ill on Christmas Day. A bright light lures them to the forest, where they meet a very scary giant with the very unscary name “Pimsti-Pumsti.” I won’t spoil the ending…

Danish is represented by Et Juledigt (A Christmas Poem), by Hans Christian Frederiksen. Although written in Danish, our edition of this illustrated religious poem was actually published in the United States – in Cedar Falls, Iowa, to be exact. Cedar Falls had a large and flourishing Danish immigrant community in the late 19th and early 20th Centuries. It had its own Danish-language newspaper and publishing house, which published Et Juledigt in 1912.

The 1912 French book La nuit de Noël dans tous les pays (Christmas Night in All Regions), by Monsignor Alphonse Chabot, sounds like it might be about Christmas around the world, but in fact it is about Christmas customs in the different regions of France. It covers everything from traditional meals and games to legends and religious celebrations.

La navidad en las montañas (Christmas in the Mountains), published in 1917, is a study version of an 1871 story by Mexican radical and author Ignacio Manuel Altamirano. It contains an introduction and notes in English as well as a Spanish-English vocabulary. The story, according to the introduction, “presents a vivid picture of rural life in Mexico.”

There are, of course, a variety of books in English concerning Christmas in various parts of the world. Round the Yule-Log: Christmas in Norway, is an 1895 English translation of a book by Norwegian folklorist Peter Christen Asbjørnsen. The framing story is that of a military officer who is obliged to spend Christmas away from his family, in a lodging house owned by two “old maids.” They invite him to come sit by the fire and tell stories to their young nieces and nephews.

Finally, there are the unusual Christmas Stories written by Danish-American social reformer Jacob Riis. Riis is best known today for his searing photographs of New York City tenement life, published in his 1890 masterwork How the Other Half Lives. Not surprisingly, several of the Christmas stories are set in the slums of New York, but he also touches on Christmas memories from his childhood in Denmark.

So put your feet up and enjoy some good winter reading, courtesy of the volunteers at Distributed Proofreaders, who wish everyone a happy and healthy holiday season!

This post was contributed by Linda Cantoni, a Distributed Proofreaders volunteer.

Christmas Then and Now

This entry was posted on Tuesday, December 1st, 2020 at 12:01 am and is filed under Book Review. You can follow any responses to this entry through the RSS 2.0 feed. You can leave a response, or trackback from your own site.

2 Responses to Christmas around the World