The American writer Edith Wharton (1862-1937) didn’t fully blossom as an artist until she was in her 40s. Raised in a stodgy “Old New York” family, trapped in an unfulfilling marriage, all her life she longed for personal and literary freedom. She was a dedicated bookworm from childhood, and through her avid reading she glimpsed vistas of art and knowledge that her family and husband, wealthy and cultured though they were, could not appreciate as deeply as she did.

For a time, she found a refuge in the Berkshire Hills of Massachusetts, at The Mount, an airy villa she designed herself, inspired by the European homes she had written about in The Decoration of Houses (1899) — so different from the dark, overstuffed brownstones of her New York youth. There she wrote her first great New York novel, The House of Mirth (1905); there she relaxed, in the cozy library with its tall windows overlooking the terrace and her beloved gardens, with kindred spirits like Henry James, reading aloud and talking of books and art.

Wharton’s appreciation for France began to grow during this time. In 1906 and 1907, she and her husband embarked on the auto trips that formed the basis for A Motor-Flight through France (1908). A long-time devotee of motoring, she declares at the opening of the book, “The motor-car has restored the romance of travel.” Now, instead of the ugliness of train travel, one has “the delight of taking a town unawares, stealing on it by back ways and unchronicled paths, and surprising in it some intimate aspect of past time, some silhouette hidden for half a century or more by the ugly mask of railway embankments and the iron bulk of a huge station.” The trips covered thousands of miles across the French landscape, alighting at tiny medieval towns and big cities, chateaux and cathedrals, ruins and gardens.

Back in America, the Lenox idyll began to sour. As her literary star ascended, her marriage deteriorated. Her husband philandered. She fell passionately and fruitlessly in love with the caddish journalist Morton Fullerton (“My life was better before I knew you,” she heartbreakingly wrote him after his ardor had cooled). Her husband plundered her trust fund. She was nearly 50 in 1911 when she finally left him, The Mount, and America to begin a new idyll in France. 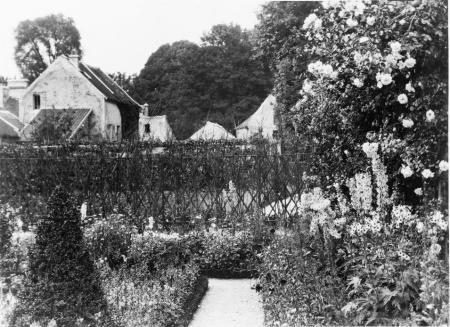 Edith Wharton’s garden at the Pavillon Colombe outside Paris

Wharton spent the rest of her life there, finally free to live the literary life she had long yearned for. She initially established herself in Paris, where she wrote Ethan Frome (1911) and several other novels. As she put it in her autobiography, A Backward Glance (1934), “In Paris no one could live without literature, and the fact that I was a professional writer, instead of frightening my fashionable friends, interested them.”

During the First World War, Wharton worked tirelessly to provide shelter, employment, schools, and hospitals for refugees. To raise money for Belgian refugees, she organized and edited The Book of the Homeless (1915), a compilation of donated works by noted writers, artists, and composers of the day. She visited the front, chronicling the devastation she saw in Fighting France (1915). The lovely pastoral landscape she had toured by car less than a decade earlier was now a wasteland:

The country between Marne and Meuse is one of the regions on which German fury spent itself most bestially during the abominable September days. Half way between Chalons and Sainte Menehould we came on the first evidence of the invasion: the lamentable ruins of the village of Auve. These pleasant villages of the Aisne, with their one long street, their half-timbered houses and high-roofed granaries with espaliered gable-ends, are all much of one pattern, and one can easily picture what Auve must have been as it looked out, in the blue September weather, above the ripening pears of its gardens to the crops in the valley and the large landscape beyond. Now it is a mere waste of rubble and cinders, not one threshold distinguishable from another.

Though extremely busy with her war-work, which later earned her medals from both France and Belgium, she still managed to write several novels during the war, including Summer (1916) and, directly inspired by the war, The Marne (1918).

In 1919, Wharton left the bustle of post-war Paris for a quiet home on its outskirts, the Pavillon Colombe, and later took a winter home at Hyères in the south of France. In her loving tribute to the French, French Ways and Their Meaning (1919), she observed:

The French are the most human of the human race, the most completely detached from the lingering spell of the ancient shadowy world in which trees and animals talked to each other, and began the education of the fumbling beast that was to deviate into Man. They have used their longer experience and their keener senses for the joy and enlightenment of the races still agrope for self-expression. The faults of France are the faults inherent in an old and excessively self-contained civilisation; her qualities are its qualities; and the most profitable way of trying to interpret French ways and their meaning is to see how this long inheritance may benefit a people which is still, intellectually and artistically, in search of itself.

Wharton went on to write many more books, including The Age of Innocence (1920), a novel about the New York society of her youth, for which she became the first woman to win the Pulitzer Prize for fiction. She returned to the United States only a couple of times, once to receive an honorary doctorate from Yale University in 1923 — another first for a woman. There was otherwise no need to return: She had found her true idyll. She died peacefully at the Pavillon Colombe in 1937.

This post was contributed by Linda Cantoni, a Distributed Proofreaders volunteer and a member of The Mount and the Edith Wharton Society. Wharton’s time in France is chronicled in a newly published book, Edith Wharton in France (Lenox: The Mount Press/Prospecta Press, 2018), by the late Claudine Lesage, which was the source of some of the information in this post.

This entry was posted on Thursday, November 1st, 2018 at 12:01 am and is filed under Book Review. You can follow any responses to this entry through the RSS 2.0 feed. You can leave a response, or trackback from your own site.