Memoirs of a Post-Processor

When I joined Distributed Proofreaders, I started with proofing and formatting as I assume most people do. I came across some fascinating snippets that I would never have read otherwise, but found I lacked the patient attention required to do a good job. This left smooth reading, at which I knew I would be hopeless, or post-processing, so post-processing it was. It probably helped that I had been a programmer in a previous existence, but I started, foolishly, with more difficult books but benefited from some very helpful and supportive post-processing verifiers.

With a hundred or so books and counting, why do I do it? Certainly to make the books available again. It produces a useful product: To ensure that the work of the many proofers, formatters and smooth readers is not in vain. But I do it mostly for the satisfaction of seeing a working ebook emerge from the collection of plain text and images I start with.

I do not specialise and the sheer range and variety of books available never fails to amaze. My reading of 18th and 19th Century books never got much beyond Sheridan le Fanu and Wilkie Collins, so I have come across a world of literature – biography, humour, philosophy, religion, science, poetry, history, fiction – which I did not realise even existed. Thank you, DP! 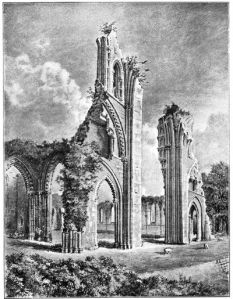 Glastonbury Abbey, from The Gate of Remembrance

One highlight is The Gate of Remembrance, subtitled, “The Story of the Psychological Experiment which Resulted in the Discovery of the Edgar Chapel at Glastonbury,” by the noted British architect, archaeologist, and psychical researcher Frederick Bligh Bond. This is a detailed account of an experiment with automatic writing over a period of years, which, the author maintains, led to the discovery of the lost chapels at Glastonbury. The author shows total confidence in the method and tackles criticism head-on in the preface. Written in a more credulous (or perhaps less hidebound) age, it is hard to imagine any serious architect or archaeologist even contemplating this approach today. Publishing would now be instant professional suicide. I am very sceptical, yet, it seemed to work, and the sincerity of the protagonists seems beyond doubt.

A completist approach to science  writing was still feasible in the late 19th Century and surprisingly popular. Now no author could possibly undertake such a venture and no publisher would consider it. Popular Scientific Recreations, by French scientist Gaston Tissandier, probably published in the 1880s, at 770 pages and 900 illustrations covering every scientific discipline known from Astronomy to Zoology, via parlour games, is an example of the genre. While it is incomplete and sometimes incorrect, it is remarkably comprehensive and up to date. Given that the author developed and flew an electric dirigible (how far has electric manned flight developed in the last 130 years!) this should not be surprising.

Another example is Outlines of Creation, by Elisha Noyce, a more modest 1858 publication of 340 pages, limiting itself to astronomy, geology and life. While unequivocally creationist in outlook, it presents the scientific evidence comprehensively and  comprehensibly, and is beautifully illustrated. As the author explained in the Introduction,

The want of a general knowledge of those works of the Great Creator which are constantly spread out before us, in these days of easy acquirement, amounts almost to a sin, for it is by the study of Nature in all her varied forms and associations, that we learn to “look from Nature up to Nature’s God;” for who can look upon the works of God without a feeling of awe and admiration?

Staying positive and not dwelling on the horrors of war, vivisection, adulteration of food, primitive medicine, etc., I enjoyed the gentle humour and the depiction of genteel life in the books by American author John Habberton, Helen’s Babies and Budge and Toddie. Concerning  the generally disruptive adventures of the two toddlers and, perhaps, marred by the author’s excessive use of baby talk, they are very light, but enlivened by excellent illustrations.

A final curio, for those who might want definitions of futtocks, dead rising, spirketing, breast hooks and many more, is A Naval Expositor by Thomas Riley Blanckley, a dictionary of naval terms from 1750.

This post was contributed by throth, a DP volunteer.

This entry was posted on Thursday, December 1st, 2016 at 12:01 am and is filed under Book Review, Volunteers' Stories. You can follow any responses to this entry through the RSS 2.0 feed. You can leave a response, or trackback from your own site.

4 Responses to Memoirs of a Post-Processor