“. . . decorated by Walter Crane.” As soon as I saw those words I knew I was sunk. When a fellow Distributed Proofreaders volunteer wrote and told me she’d stumbled across this book and it just reminded her of me (okay, she said it jumped up and down and screamed my name, but I digress), I had to check it out. And there it was: “. . .decorated by Walter Crane.” Walter Crane is one of my favorite illustrators. Right up there with H. R. Millar, Randolph Caldecott, Kate Greenaway. . . 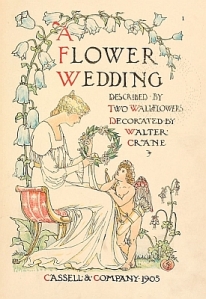 “Decorated by Walter Crane.” A Flower Wedding is Distributed Proofreaders’ 33,000th e-book production. This beautiful little book tells the tale of the wedding of two flowers, their guests and even the feast. It was reprinted in 2014 for the exhibition of Wedding Dresses 1775-2014 at the Victoria and Albert Museum in London.

Young LAD’S LOVE had courted Miss Meadow·Sweet,
And the two soon agreed at the Altar to meet.

The flowers for the most part, scorn the names chosen by the botanists and claim the ones given them by the grandmothers, great-aunts, uncles and other loving gardeners who named them for their shape, beauty, colour and charm.

The gifts the guests brought would fill a fanciful home with treasures . . . decorated by Walter Crane.

Buttercups gold, and a Pitcher-plant
Nay, everything that a house could want.

The bride and groom ride off in a Venus flytrap with the guests calling after:

“Speedwell, and be happy,” their friends gaily say;

and the party continues.

The Wild-thyme they had, and the fuss that was made
Kept the guests in a rout thro’ the Deadly night shade.

Lavishly decorated by Walter Crane. He was remarkably prolific, painting not only illustrations in many children’s books, but also murals, flyers and posters for the Socialist movement, wallpapers, tiles, pottery. He also taught, and two of his books based on his lecture series, The Bases of Design and Line and Form, can be found on Project Gutenberg as well. He was not above scandal for the time. Firstly, he supported Socialist causes and, speaking of support, whilst Vice President of the Healthy and Artistic Dress Union, he illustrated a pamphlet, “How to Dress Without a Corset.” He attended a meeting of Boston anarchists and declared that he thought the Haymarket Square Riot convictions were wrong. This cost him a great deal of public support in the United States, including financial support. But it eventually blew over, and his beautiful art continued on. Our lives may be a bit richer, our children’s imaginations a bit fuller, because they were decorated by Walter Crane.

This entry was posted on Monday, November 28th, 2016 at 1:16 pm and is filed under Book Review, Special Day. You can follow any responses to this entry through the RSS 2.0 feed. You can leave a response, or trackback from your own site.

6 Responses to Decorated by Walter Crane