These are a few of my favourite things

A while ago I wrote about Smooth-Reading and the variety of things I’ve read while doing it. I thought that, today, I’d mention a handful of those books in more detail. These were ones that, for some reason or another, really stood out for me. 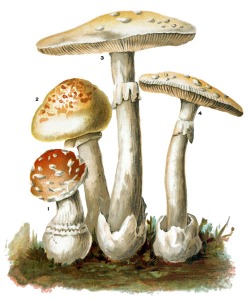 Poisonous Mushrooms of the Genus Amanita

One was a brilliant book called Mushrooms of America, Edible and Poisonous, with absolutely beautiful pictures, like the one to the left. It told you how to tell which ones are poisonous—and how to cook the ones that aren’t. It was the first one that I felt compelled to download, just so I could look at the pictures again. I also have a weakness for recipe books, so it fed another of my guilty pleasures at the same time. (By the way, don’t try eating these ones, they’re definitely not good for you.)

Another pick of the bunch was Jacko and Jumpo Kinkytail (The Funny Monkey Boys), a collection of 31 bedtime stories for young children by Howard R. Garis, with extremely surreal endings. This is one of a series of books by the same author, many of which are now available on Project Gutenberg. One chapter ending goes:

Now next I’m going to tell you about the Kinkytails and the doll’s house—that is, if the alarm clock will stop making figures all over my paper so I can write the story, and if the coffee pot doesn’t step on the rolling pin’s toes.

Well, things must have worked out OK because the next story was, indeed, as advertised. The stories themselves contained a distinctly surreal universe. I think the children to whom these stories were read probably grew up to be imaginative and inventive individuals, or possibly horribly disturbed. It’s a bit of a coin toss as to which.

Then there was the excellent and very entertaining Stanley in Africa. The Wonderful Discoveries and Thrilling Adventures of the Great African Explorer and Other Travelers, Pioneers and Missionaries. Stanley was the man who found Dr. Livingstone, who’d been lost in the African Interior for a while, and greeted him with the immortal words “Dr. Livingstone, I presume”. It is, of course, typical of its time (1889) and there are things in it, such as the casual racism, that we cringe at nowadays. It does, however, contain some useful information on what to do if attacked by an ostrich.

Ostrich farming is a large industry in these South African States. […] The birds are innocent and stupid looking, but can attack with great ferocity, and strike very powerfully with their feet. The only safe posture under attack by them is to lie down. They then can only trample on you.

OK. I’ll try and remember that if I encounter any.

An out-and-out winner was the final two volumes of The Paston Letters, a collection of letters, wills and other documents relating to an influential Norfolk family between 1422 and 1509. Most of the letters are either written in haste, or to be delivered in haste, and they tell you not just about the things you get in history books, but also domestic issues and family quarrels. One spat occurs when a daughter of the family, Margery, gets engaged to a man without her family’s knowledge or permission and her mother refuses to have her in the house or to speak to her again—categorising her as a loose woman. The marriage goes ahead, but I suspect they’d planned a more advantageous match for her than one of their employees. She is very noticeably omitted from her mother’s will, in which everyone and their grandmothers are left something. At one point they seem very short of money, their letters are full of requests to each other for cash, and replies saying “don’t ask me, I don’t have any money.” Their wills are extraordinarily detailed—individual bequests include mattresses and specific pieces of bedding. They lived at quite a turbulent period, kings come and go, including Richard III—to this day depicted as a hunched and limping villain who killed his nephews. They seem to have come round, financially, by the time we leave them in 1509, but I have no doubt they continued to have their ups and downs.

Another favourite was a book on copyright law from 1902. I have spent much of my working life in places where copyright and intellectual property are hot topics. So the subject caught my eye and I picked it up to read. Written by a lawyer, for other lawyers, A Treatise upon the Law of Copyright in the United Kingdom and the Dominions of the Crown, and in the United States of America, by a barrister named E.J. MacGillivray, was fascinating reading, and surprisingly accessible to a lay person such as myself. It rounded up the development of the idea of copyright and all the laws that had sought to provide protection to writers and other creative artists, together with clarifications obtained during a huge number of court cases. The author’s aim was simple:

The foundations of this work were laid by my endeavours to understand what is perhaps the most complicated and obscure series of statutes in the statute book. In working from time to time at the Law of Copyright I found great want of a textbook which should be exhaustive of the case law, and at the same time contain a concise and clearly arranged epitome of the statutory provisions. This want I have tried to supply for myself in the present compilation, and it is now published in the hope that it may prove useful to others.

I think he succeeded admirably, and although the law will have changed in the ensuing century, it’s still an excellent summary of the development of copyright protection in the UK, the USA and various places that were part of the British empire.

I can’t recommend Smooth-Reading enough as a fun thing to do with your time. Right now there are dozens of books, ranging across novels for adults and children, history, drama, science, and others.

Ooohh, choices, choices. What shall I pick first?

This entry was posted on Monday, August 1st, 2016 at 12:01 am and is filed under Book Review, Smooth Reading, Volunteers' Stories. You can follow any responses to this entry through the RSS 2.0 feed. You can leave a response, or trackback from your own site.

3 Responses to These are a few of my favourite things