Distributed Proofreaders is proud to celebrate its 31,000th title, Colour in the Flower Garden — many thanks to all the volunteers who worked on it! 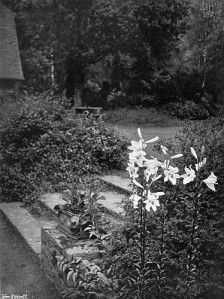 Gertrude Jekyll, probably (after Capability Brown) the most famous English garden designer, lived from 1843 to 1932 and created at least 400 major gardens within Europe and North America, often working closely with the architect Sir Edwin Lutyens. She set out to develop a career as a painter, but developed an interest in the use of colour in planting, and, possibly prompted by deteriorating eyesight, moved into garden design. She was heavily influenced by Impressionism, eschewing excessive formality in design and planting.

Her book Colour in the Flower Garden sums up the experience of 40 years, using the garden she designed for herself at Munstead Wood. The book describes her philosophy in detail and gives detailed planting schemes for many areas of the garden, but is by no means prescriptive. She describes what she has done and why, and lets the results speak for themselves.

It is also profusely illustrated with, regrettably monochrome, photographs of the garden.

For the gardener, it is a very accessible and interesting record, but from an age and of a scale which make it, perhaps, less than useful.

Two quotations give a flavour of the scale and ambition.

Talking of flower borders: “I believe that the only way in which it can be made successful is to devote certain borders to certain times of year; each border or garden region to be bright for from one to three months.”

And about one area of her garden: “Ten acres is but a small area for a bit of woodland, yet it can be made apparently much larger by well-considered treatment.”

This post was contributed by Les Galloway, a DP volunteer who post-processed this project.

This entry was posted on Sunday, December 27th, 2015 at 8:42 am and is filed under Book Review, Special Day. You can follow any responses to this entry through the RSS 2.0 feed. You can leave a response, or trackback from your own site.