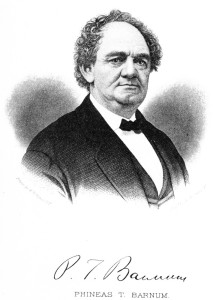 Even though it may be common knowledge to some, I had not known that P.T. Barnum was the owner and manager of a museum. I’d only thought of him in relation to travelling circuses. Struggles and Triumphs: or, Forty Years’ Recollections of P.T. Barnum, by the great showman himself, describes how he went from being involved with travelling circuses to owning and running a museum (funny and entertaining, I thought) as well as the tribulations of managing the museum once he’d acquired it (even funnier).

To describe the details of how he came to own the museum might potentially spoil the story for the reader, but I’ll give a couple of examples of the on the job training which he experienced himself whilst endeavouring to turn his museum into a success via trial and error, as well as some of the wisdom or street nous or business acumen or psychological tricks which he brought to the endeavour himself.

Above the entrance to his museum he situated a small band of musicians. They weren’t very good, but that meant they were relatively cheap, the idea being to make noise and attract attention. If, however, the band were to be too good, then people might just stand on the side of the street and listen to the music for free rather than pay the small price of admission and actually enter the museum as intended. As the band was not very good, a lot of people entered the museum, after being reeled in by the music to find out what it was all about, just to get away from the noise.

Another strategy he employed in order to drum up business was to hire a man to take a plain house brick and simply walk a circular route around town, passing several busy intersections, and intermittently stop, put down the brick and just stand there next to the brick for a few moments before picking up the brick again and continuing on his route. It was critical that he not respond to anybody asking him what he was up to or what the deal was in regards to the brick he carried. He also had no sign mentioning the museum or anything else. At the end of his silent route, he would enter the museum, taking a simple tour of all the exhibits, before once again going out and walking his route through town and performing his little interaction with the brick here and there in one continuous cyclic pantomime. Many people followed him, since he would not reply to basic inquiries, and even paid the small price of admission to the museum just in order to follow him inside and figure out what this curious fellow was up to.

His intention was to keep the price of admission low, but have high turnover by getting as many people in and out of the museum as possible in a constant stream of customers. The customers, however, had other ideas. They brought box lunches and sought to make a day of it, to the point that he could not sell more tickets to let more people in, even though at that point he had more people lining up just to get into his museum, because the interior of his museum was simply full to the brim with customers already, who intended to get their money’s worth by staying most of the day. He countered this by opening a backdoor of the museum and putting up a sign stating “TO THE EGRESS,” pointing to that rear exit. The malingering crowd of customers inside the museum who weren’t playing his bums-through-the-turnstiles game properly, in his opinion, thought the sign indicated another newly opened exotic exhibit and left the museum via that exit to check it out, allowing the queues out the front to once again flow, as well as the money from further ticket sales.

There’s little doubt that Barnum had a head for business and showmanship, as the museum was a huge success. But it was very interesting, funny and entertaining to read the details of how that success was created and how inevitable problems were overcome.

I haven’t even mentioned the adventures of tiny Tom Thumb, the “Little General”, whom Barnum took on tour through Europe. The interactions of the pint-sized charmer with the royalty of Britain and France, for example, were a delight to read in and of themselves.

This post was contributed by FallenArchangel, a DP volunteer.

This entry was posted on Saturday, November 7th, 2015 at 12:01 am and is filed under Book Review. You can follow any responses to this entry through the RSS 2.0 feed. You can leave a response, or trackback from your own site.