Something to Do in the Meantime

While the Distributed Proofreaders website is down, you might like to check out some of the other books we’ve already posted to Project Gutenberg. One you may enjoy is a book I read recently, Poison Romance and Poison Mysteries by CJS Thompson. 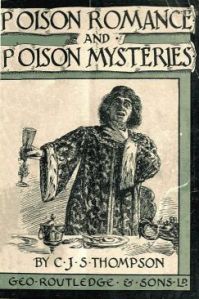 This thoroughly enjoyable book, published in 1904, begins with an advertisement for the health-giving properties of Eno’s Fruit Salt and ends with an advert from a tea and coffee purveyor. I’m not sure they’d have been too happy at the association with poisons. It’s partly a history of poisons and poisoning and partly a titillating true-crime book, with a foray into criticism of the use of poison in fiction.

1  Although I don’t think he realised he was writing a poisoner’s manual, and I don’t recommend experimenting. 😉

Interestingly, tobacco is included in the list of poisons, it seems that even in 1904, tobacco was considered harmful by some.

“The habitual inhalation of tobacco smoke is undoubtedly harmful, but unless the smoke be intentionally inhaled, very little makes its way into the lungs.”

“Employed to excess, it enfeebles digestion, produces emaciation and general debility, and is often the beginning of serious nervous disorders.“

But on the other hand

Be this as it may, the moderate smoking of tobacco has, in most cases, even beneficial results, and there appears little doubt that it acts as a solace and comfort to the poor as well as the rich. It soothes the restless, calms mental and corporeal inquietude, and produces a condition of repose without a corresponding reaction or after-effect. In adults, especially those liable to mental worry, and all brain workers, its action is often a boon, the only danger being in overstepping the boundary of moderation to excess.

Indeed, at the beginning of the 1600s, King James I is reported as describing smoking as

a custom loathsome to the eye, hatefull to the nose, harmfull to the brain, dangerous to the lungs; and in the black, stinking fume thereof, nearest resembling the horrible Stygian smoake of the pit that is bottomlesse

When criticising the fictional depiction of poison, the author’s worst strictures are reserved for

the lady novelist is the greatest sinner in this respect, and stranger poisons are evolved from her fertile brain than were ever known to man.

Real life poisoning cases are described and analysed, including various ladies who were accused of murdering their husbands and lovers, a doctor who murdered his brother in law, another who killed his wife and mother in law, the infamous Neill Cream who killed a number of young women, and a celebrated recent American murder case.

In recommending this book, I really can’t put it better than the reviewers did at the time.

The Saturday Review:—”A great deal of curious information concerning the history of poisons and poisonings.”

Illustrated London News:—”The story portions will attract most attention, and the poisoned gloves and rings of old romance supply satisfaction to that sensational instinct which is absent in hardly one of us.”

The Queen:—”Will fascinate most people. Is very readably written. Its only fault is that it is too short.”

Liverpool Courier:—”It is a readable book as well as an able one. The author is an eminent toxicologist and writes pleasantly on the lore connected with the science.”

The Scotsman:—”It is successful and interesting. Full of odd and startling information.”

Aberdeen Free Press:—”Fascinates the majority of his readers. One could wish that Mr. Thompson had written much more.”

Glasgow Citizen:—”A book of the week.”

My own review? A fascinating, entertaining book that should be on everybody’s ‘must read’ list.

This entry was posted on Wednesday, March 5th, 2014 at 12:01 am and is filed under Book Review, Smooth Reading. You can follow any responses to this entry through the RSS 2.0 feed. You can leave a response, or trackback from your own site.

5 Responses to Something to Do in the Meantime